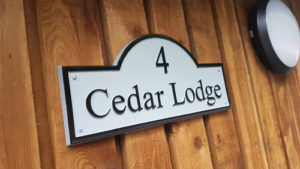 Enniskillen’s landmark Four Star Killyhevlin Hotel is due to open it’s brand new Lakeside Lodges next week and LE Graphics were delighted to have been called upon to help with some of the finishing touches this week.

In addition to signage in the car parking area as well as banners, signs and other marketing products we were pleased to be able to help with some of the finer detail for the lodges themselves.  Amongst other things we supplied custom logo mats for each lodge – featuring the Killyhevlin’s new “K” logo set on a colour scheme which compliments the interior of the lodges.

We also made and fitted some cast plaques outside each lodge denoting the number and name of the lodge, the lodges have all been named after species of tree for example Oak and Beech and this theme was carried over onto the custom key fobs which we made from reclaimed maple wood which was laser engraved with the name of each lodge along with the Killyhevlin logo.

Killyhevlin are now taking bookings for the Lodges so create your own “memories by the lake” by contacting them on 028 6632 3481 or online at www.killyhevlin.com